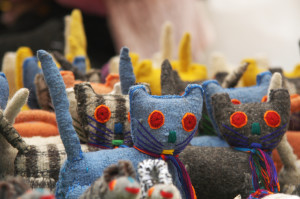 The hair used to decorate Native American dolls usually comes from either human or animal hair. Navajo dolls are often adorned with turquoise colored beads; these turquoise necklaces and earrings symbolize wealth within the Navajo community. Other dolls, such as the Kachina doll is made to represent a spirit. Generally carved from wood, Kachina dolls are intricately designed, using advanced wood carving skills.

Within the Native American culture, dolls are used to represent and teach children how they will grow up and contribute to their tribe. For example, sometimes female dolls are made carrying a child on their backs, representing the women caring for her child. Other female dolls will be seen holding woven baskets, whereas male dolls will often be made holding a bow and arrow.