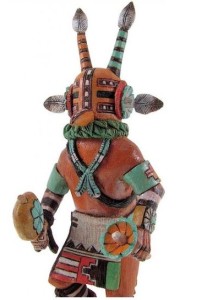 History of the Kachina Doll

When the doll was made in the Early Traditional period, it was carved out of cottonwood with one piece making up the body. It was never longer than 10” and was not very lifelike. Around 1900 the Kachina Doll began to look more realistic with the Hopi Tribes selling the Kachina Doll to the white man for $0.25.

From 1910 to 1930, subtle changes were made. The Late Traditional period saw the Hopi tribes creating a more realistic Kachina Doll. Each Kachina Doll was detailed and proportionate. This was largely due to the popularity of the Native American culture. The elder Hopi members did not allow tourists to view the Kachina Doll that was used for ceremonies, and because of this, commercial Kachina Doll production declined.

When Charles Burton did his best to restrict the religious rights of the Hopi in the early part of the 20th century, the Indian Reorganization Act stepped in and gave them back their freedom. This caused a renewed interest in the Kachina Doll. The Kachina Doll made from 1930 to 1945 was stiff and had arms separate from the torso. The Kachina Doll cost $1.00 per inch in the Action Period and was dressed in real clothing instead of costumes that were painted on.

The Late Action period features a realistic Kachina Doll with moving body parts. The costumes were incredibly detailed with Hopi carvers beginning to add bases to the Kachina Doll. When the Endangered Species Act and Migratory Bird Treaty banned Kachina Doll sales, parakeets, eagles, and other bird’s feathers were carved into the Kachina Doll creating a new trend. This brought up the prices, and today anything made between 1945 and the mid-1970’s can fetch up to $1,000 dollars. A Kachina Doll from this period recently sold at auction for nearly $10,000.

Today the majority of Hopi manufacturers do not sell the Kachina Doll for its original purpose however; Hopi tribes still have Kachina ceremonies.