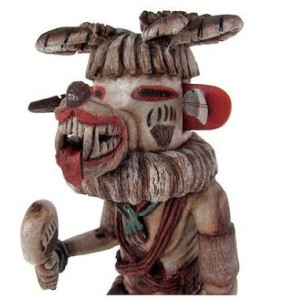 Hopi literally translates to “peaceful”. The Hopi people are Native Americans who are indigenous to Northeast Arizona. Hopi Kachinas are dolls made to represent a series of cultural ideals that the Hopi people believe in. Hopi Kachinas also have spiritual significance. While Hopi Kachinas were once given as gifts and used for ceremonial purposes, today they are made to carry on a long line of Hopi traditions.

Kachina dolls started appearing around 1850. They were considered gifts that imbued the spiritual symbolism of Hopi traditions. There are many types of Hopi Kachinas that have varying significance. Many of these dolls were originally given to children.

Hopi Kachinas called “Putsqatihu” were made specifically for infant children. Very young children were given Hopi Kachinas called “Tithu.” These Kachinas were used primarily for ceremonial reasons. While these dolls are given to children, they’re not considered toys for them to play with. Often, they adorned homes to commemorate certain events in the child’s life.

The Hopi people believed that the spirits of their ancestors lived on Humphreys peak, a huge mountain several miles to the West of the Hopi homelands. Hopi Kachinas symbolized the passing of the dead and also may have represented the rebirth of the tradition within Hopi youth. It is for this reason that Hopi kachinas may have been given to very young children and infants.

Hopi Kachinas have always been carved out of wood. The abundant wood used in Northeast Arizona was the root of cottonwood trees. Today, Hopi dolls have a sort of symbolism for the Hopi people that is still carried out in a long legacy of tradition. Modern Kachina dolls can be made out of any type of wood available, for the Hopi people it is the spiritual and communal symbolism of the Hopi Kachinas that gives them significance.

A lot of makers of Hopi Kachinas still find the need to use genuine cottonwood root to create their dolls. The four types of Hopi Kachinas can all look very different. Once they’ve been carved, they usually receive a clay finish. Modern dolls add pieces such as plastic and yarn. The dollars are often festive in nature. They may have pieces of jewelry, feathers, or small handmade craft items such as bows placed in their hands. Clothing can be hand-knit and added to the doll to dress it. These pieces can also be painted on.